Amanda Macuiba, a Compensation Analyst at IDEX Corporate in Chicago, qualified for the 2020 USA Olympic Track & Field Trials by finishing in less than 2 hours 45 minutes at the California International Marathon in Sacramento on Sunday.

To qualify for the Women’s US Olympic Team Trials, participants must finish a marathon (26.2 miles) in less than 2:45:00. Amanda sped through the course with an average pace of 6:17 minutes/mile and finished with 31 seconds to spare and a personal best time of 2:44:29.

“Around mile 17, I began to get tired and started to struggle. I negotiated internally and forced myself to stay engaged. I saw a couple of girls who were also trying to qualify, and just focused on remaining close to them,” Amanda said. “Around mile 20, I found a second wind. My mentality completely shifted, and I realized that I could still do it!”

“I love being able to set goals, especially when it’s a stretch, and see them accomplished,” she said. “Unreal is the only word I have. All those 100-mile weeks, all of the exhaustion paid off. Crossing the finish line, I’ve never felt more prideful.”

“It’s baffling and amazing at the same time,” she said. 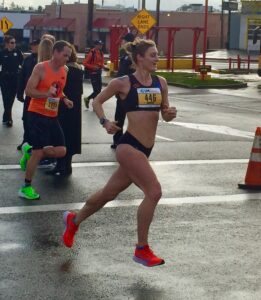 Growing up, Amanda’s family vacations were tied to the locations of the Ironman Triathlons in which her father raced. She began running when she joined the cross country team in high school, but focused on soccer as she entered her freshman year of college at Illinois Wesleyan University.

She decided to leave the soccer team after her freshman year and began running the Steeplechase for the Illinois Wesleyan Track & Field team in 2013. Embracing her new sport, she ran her first marathon in Vienna, Austria, in 2015 and competed in the Division III Women’s National Outdoor Championships during her senior year of college.

After graduating college, Amanda ran six more marathons, including the Boston, Chicago, and California International, before deciding to train for the Olympic trials. When she attempted to qualify for the trials earlier in 2019, she ran the Illinois Marathon in 2 hours 50 minutes.

“I was so frustrated with myself (for not qualifying), that I immediately registered for the CIM (California International Marathon). I knew I had run a personal best there a year earlier, and wanted to give myself a six month training cycle,” she said.

With the help of family friend and 1996 US Olympic Trial Winner Jenny Spangler, Amanda significantly improved her speed in short distances, long-term endurance, strength, and flexibility over the last six months.

Amanda will continue to partner with Jenny and plans to start training again as early as next week.

The 2020 USA Olympic Track & Field Trials will take place in Atlanta, Georgia on Saturday, February 29. The three women with the fastest finishes will make the U.S. Olympic Team and will compete in the 2020 Summer Olympic Games in Tokyo.

About 200 women competed in the U.S. Olympic Trials marathon in February 2016. The winners who went on to the games in Rio de Janeiro all had times just under 2 hours 30 minutes. 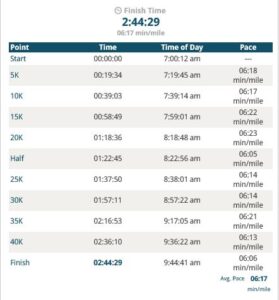