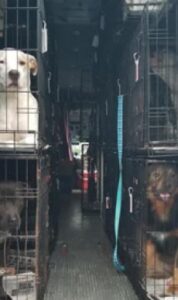 Jim, who has been involved with One Love Animal Rescue since 2015, embarked on the long journey with three other dog-lovers. They split the 36-hour drive, stopping only for fuel and bathroom breaks.

“It was emotional, wonderful, intense at times as we drove through rain, loud with 51 dogs barking most of the time, and ultimately rewarding to see all the dogs go directly into foster care,” Jim said. “Three of the sweet dogs were adopted by the time we got back to Savannah.,”

Adoptions and purchases of dogs have soared in the United States during the pandemic, as people have sought companionship. Some shelters, particularly in northern states, have run out of adoptable animals. At the same time, shelters in southern states still had dogs, creating an imbalance that Jim and his team helped address.

Relocating these often-mistreated animals, saves their lives as 80% of the animals may have been euthanized if not for these efforts.