It wasn’t just training and innate reaction that led him to that tool choice. It was also experience. Fire had hit that same storage facility a few months before, and the response team used the StrongArm tool to cut the locks off 30 doors in less than five minutes.

The HURST team recently talked with Chief McMahan about the importance of getting the doors open so quickly and why he chose StrongArm. 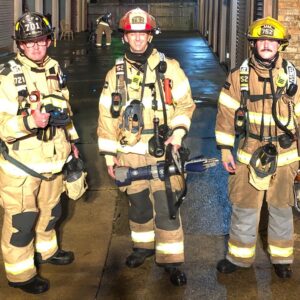 Q: Tell us about the first time you were called to a fire at the mini-storage unit last fall.

A: When we arrived, we saw there were a couple of units on fire on each side of the drive, so we knew we needed to quickly cover a scene that was spread out. The ladder company got there, and the ladder captain and I immediately began forcing entry on the units using the StrongArm. There were 15 units per side, 30 total, and we had all the locks cut off the whole building in less than five minutes.

Q: You received a similar call this spring. Why was the second call different?

A: When we got on scene, we could see fire coming from the storage units. The fire was more advanced, and we had reports that people could be inside some of the storage units. Based on experience with a similar fire at the same facility, we got the StrongArm and went to work because it had proved itself. I had all the locks off in less than five minutes, giving the engine companies access to put the fire out while freeing up the ladder company to do ventilation.

Q: You said there could have been people inside the storage units?

A: Yes. We had credible information that people were working in some of the units. The battalion chief yelled, “There could be people inside of these! Get the doors open.” I immediately knew which tool to get.

Q: Why did you choose StrongArm as your door breaching tool?

A: Ordinarily, we would have used a K Saw, which is an abrasive, metal-cutting saw. It would have taken a lot longer to get through these locks on these storage units. Not only that, but there’s no way to cut the lock off without damaging the doors; the saw is heavy, and you’d bump into the door latching mechanisms.

For me, this was a no-brainer. StrongArm was the tool for it because of the power versus weight ratio and the minimal chance of destroying the door latching mechanisms. The removable tips of the StrongArm let us easily get just the lock, so the owner could shut the door, put a new lock on it and it’s fixed.

A: StrongArm helped us live our mantra that night: Life safety, incident stabilization and property conservation.

Q: Do you have any advice for other first responders considering StrongArm and HURST Jaws of Life?

A: We’ve had StrongArm tools for a year, maybe a year and a half, and we’ve used it for forcible entry into buildings and even popped a car door in a minor incident. But I’d tell them to judge for yourself. Get a sales rep to get StrongArm and eDRAULIC® tools out there and put them to the test. I’m not buying based on specifications; specs are outputs and are easily manipulated. I’m buying based on outcomes, and the outcome in these two incidents speaks for itself: StrongArm took care of business quickly and easily and with the least amount of property destruction.