Team members at HURST Jaws of Life®, a business unit of IDEX Fire & Safety, began celebrating the 50th anniversary of the revolutionary brand in Shelby, North Carolina this week. The company, whose hero tool set the standard in the rescue industry, is marking its half-century milestone with a celebratory logo, and will distribute challenge coins, patches and more to first responders throughout 2022.

“HURST Jaws of Life has been an icon for the rescue tool industry for 50 years, and we’re proud to celebrate this incredible anniversary along with our dealers who serve as ambassadors for the brand and the first responders who rely on the tools to save lives,” said Britt Hawkins, manager, marketing services, HURST Jaws of Life.

The history of HURST Jaws of Life rescue tools began when innovator George Hurst, a racing enthusiast and the manufacturer of Hurst shifters , devised a prototype tool to extricate auto racers from high-speed wrecks. In 1972, less than a year later, the HURST Power Tool made its public debut with production of the model JL-32, which soon began helping first responders extricate everyday drivers from roadside accidents. It gained popularity among firefighters, emergency technicians and law enforcement, and it was soon monikered and then trademarked as the “Jaws of Life.”

Since the original spreaders debuted, HURST Jaws of Life has expanded the rescue tool portfolio to also include cutters, combination tools, rescue rams and accessories to help first responders stay safe at the scene. Today’s tools are smaller and lightweight, and they can cut, spread, lift and breach metal, wood and rebar on vehicles and structures to allow first responders to get to entrapped people and save their lives.

Over the years, the company has continually raised the bar on rescue tool power and performance. It introduced the industry’s first battery-powered extrication tool line, eDRAULIC®, in 2010, allowing first responders tool operation unencumbered by hoses and generators. It next invented StrongArm®, a battery-powered multitool that fits easily in the trunk of a law enforcement vehicle and operates quietly enough for SWAT team use.  In 2019, HURST Jaws of Life launched eDRAULIC Watertight Extrication Tool (EWXT), the first battery-operated tool line to operate completely submerged in fresh water. In 2021, HURST Jaws of Life debuted eDRAULIC 3.0, a revolutionary extrication tool line offering turbo power, a smart dashboard and fresh and saltwater compatibility.

“HURST Jaws of Life has been equipping heroes for 50 years, and we look forward to bringing continued innovation and first-to-market solutions to the rescue industry for years to come,” Hawkins said. 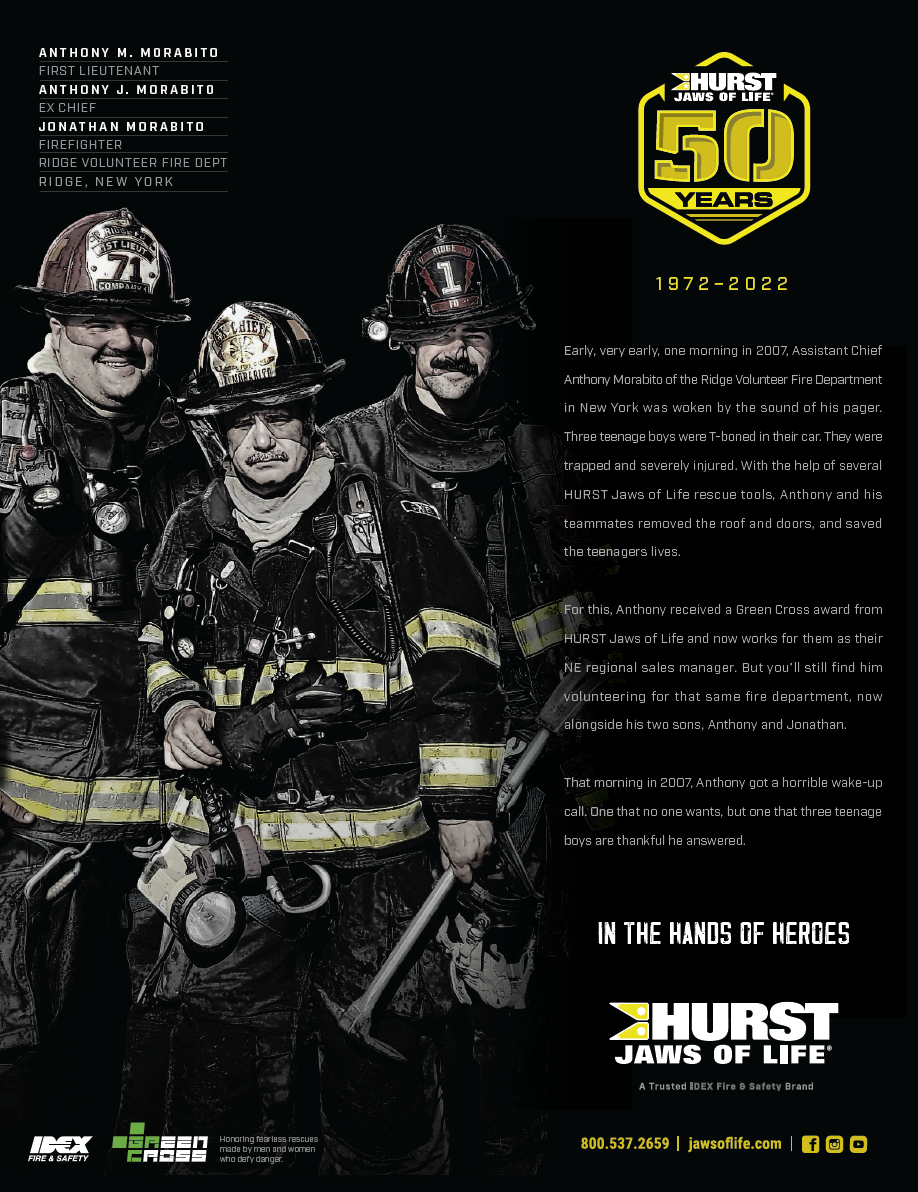